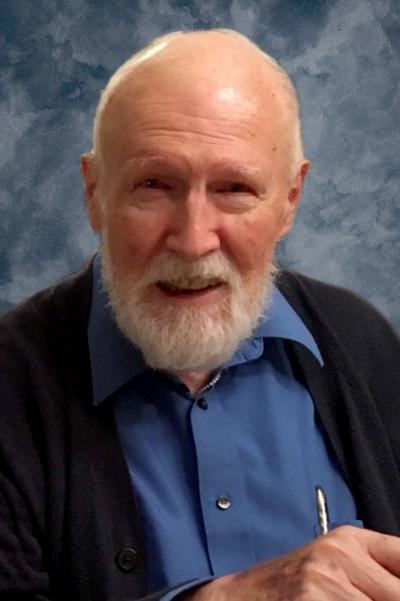 The son of Anne Fraser and Richard Gale Buzby, Bruce was born January 10, 1930 on Long Island, NY and grew up on Grand Island outside Buffalo, NY. Grand Island was not very developed when Bruce was a youth, which allowed him to learn about and cultivate a great love of the outdoors. It also gave him time for his other love - reading!

Dr. Bruce Buzby received his Ph.D in Mathematics from Indiana University in 1960 after completing his B.S. in Physics at Antioch College in 1954. He was then hired by Union Carbide as a management consultant, having worked for them while a graduate student. He had a lifelong interest in systems; how they worked and how they could be improved. While at Union Carbide he worked on inventory control issues and other systems to minimize costs while maximizing efficiency. Exploring new computer systems and learning about cutting edge technologies was one of his favorite aspects of his job. He became an Apple convert not long after the introduction of the Apple Lisa computer in 1983.

After retiring from Union Carbide, he embarked on a rewarding career as a professor in the University of Connecticut’s MBA program. While there, he invited his adult children to lectures at the university (operations research) and enjoyed giving his grandchildren tours of his office. He retired after 18 years in 2005.

A lifelong Unitarian, he served as President of the Chaning Club, a group of student Unitarians, representing the Club at a national convention on Star Island in June 1947. Later while raising a family with his ex-wife Sylvia Buzby, who survives him, Bruce was a long time and active member of the Unitarian Universal Fellowship of Huntington, Long Island NY. He served on the Finance Committee and as Treasurer, while also participating in other long and short term committees and discussion groups.

When they moved to Brookfield, Bruce and his 2nd wife Geri joined the Unitarian Universalist Congregation of Danbury in January 1981, and were very active there. He founded and ran the book Conversations group up until a few years ago. The Finance Team and the Stewardship program were particularly important to him.

Bruce actively played tennis for most of his life. He had a group he played with in Brookfield for over 30 years and he was still playing tennis in his 80’s. He said their game changed a little over the years; instead of trying to hit shots the other team couldn’t get, they were sending them ones they could.

Bruce was an avid camper and his children remember the many camping and canoeing trips they took as family vacations. Since he grew up hiking in the woods of Grand Island, NY he was able to bring that love of the outdoors to his children.

He enjoyed traveling and seeing new things throughout his life. After his retirement, he and Geri traveled to many places including Chile, Italy, and Israel. He developed his photography skills and took many photographs of his travels (and snow scenes) which now adorn the walls of his children’s homes.

He was also able to devote more time to gardening, including the last couple of years when he embarked on a project planning and installing multiple garden beds at his home in Brookfield.  He had a little issue with bamboo which eventually needed to be professionally removed. He enjoyed learning new things and was always reading and taking different courses. He enjoyed playing Go and Chess, and his children and grandchildren have many fond memories of him teaching them.

Since his wife Geri is an artist, art and the world of art was an important piece of his life. Her son recently said “Every piece of art she’s produced since 1980 is a testament to his love for her. He’s as much the creator as she is”.

He is remembered as a very good conversationalist, interested in what people were doing and thinking about, and happy to share his knowledge and perspective. He found joy in everyday things and had a subtle sense of humor which was appreciated by all. He was also known as a kind and gentle man, strong and focused on the future and how he could develop himself. He will be greatly missed.

Services to be held at a later date.

Share Your Memory of
Bruce
Upload Your Memory View All Memories
Be the first to upload a memory!
Share A Memory
Plant a Tree