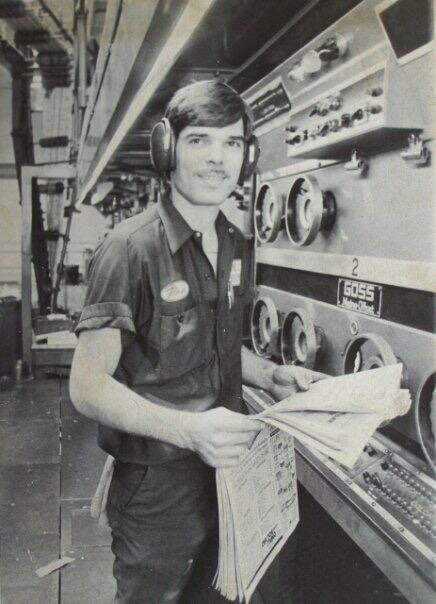 Francis J. Haddy, of North Conway, NH, beloved husband of Jacqueline (Menard) Haddy, died peacefully at Memorial Hospital on April 29, 2022.  He was born in Danbury on January 6, 1954, son of the late Francis J. and Mary (McColgan) Haddy.  He was a graduate of Immaculate High School, Class of 1972.

Frank worked as Pressroom Manager for The Conway Daily Sun in North Conway, NH.  His career in newspapers and printing began at the Danbury News Times while he was in high school, initially working part time placing inserts into the papers prior to delivery.  Frank was fascinated with the operation of the printing presses and began his pressman apprenticeship following high school graduation. Upon completion of his journeyman license, Frank worked as a pressman at The News Times until he relocated to New Hampshire and was the first pressman at The Conway Daily Sun in North Conway, NH.

Frank ran the Sun's pressroom since the newspaper was founded in North Conway on Jan. 23, 1989 and except for vacation and recent medical absences has printed every edition of the Sun, a total of approximately 130 million copies.  Sun Publisher and good friend, Mark Guerringue, said, "All successful ventures require hard work and a bit of luck, and it was Frank's hard work and Guerringue's good fortune in finding him that were major factors in the paper's success."

Frank loved music and was known to belt out a tune at Karaoke whenever the opportunity arose. The man could sing! He always enjoyed being outdoors whether it be golfing, working in the yard, or fishing with his beloved wife. Frank enjoyed bird watching and often said the crows were his friends. He took pride in everything he put his hand to, especially his firewood pile. He would spend hours in the garage, rightly admiring the perfectly stacked walls of wood. It was a sight to behold and boy was he excited to share it with his family.

He loved nothing more than a trip to the dump or post office and long rides in his beloved '04 Chevrolet Silverado. He was impeccably organized between his pressroom and home garage tool collection. Not an item was out of place. He also loved to eat and thoroughly enjoyed a meal out but especially loved a home cooked meal. Both his wife, Jackie and daughter, Kelly are incredible cooks and loved to prepare hearty meals for Frank.

A Memorial Service and celebration of Frank’s life will be on Thursday, May 5th at 11:30am at St. James Lutheran Church in Southbury.  Burial in St. Peter Cemetery in Danbury will be held privately.

Share Your Memory of
Francis
Upload Your Memory View All Memories
Be the first to upload a memory!
Share A Memory
Plant a Tree