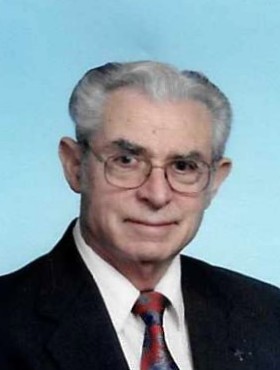 Danbury – John/aka/Sebastian Romano was born November 7, 1927 to Liborio and Angelina Romano in Williamsport, Pennsylvania. John grew up in Mistretta, Sicily where he attended school. He returned to the United States when he was 23 years old.  On December 4, 1954, he married the former Mary Thomas in Shickshinny, Pennsylvania. They had 4 children: David L. Romano of Swanzey, N.H, John S. Romano of Bethel, CT, Angela A. Magrino and Vincent R. Romano of Danbury CT. They also had two grandchildren- John J. Romano of Derby CT, Jessica R Romano of Cape Neddick, ME.

John worked as a landscaper/excavator until his retirement in 1989. He had been a member of the First Assembly of God church in Brookfield CT, where he served as a deacon for 33 years. He was in charge of water baptism services, sang with the adult choir, taught bible study class each week, as well as Sunday school since 1963, teaching youth and adults for 20 years. He also served as a Royal Ranger Commander and Chaplain for 31 years. John accepted the lord as his personal savior in October 1952.

John authored a book, “From Everlasting to Everlasting.” John published this book in March 2004. John and his wife moved to port Orange, Florida and became members of the Victorious Life Church. He also taught Sunday school class, held bible studies in his home, and church, while serving as Deacon. In 2012 he moved to Springfield, Missouri and lived in Marantha Village. In 2016, John moved back to Danbury, CT after the death of his wife. John has gone on 5 MAPS missions trips with the church in Brookfield, CT to the following countries; Ecuador, Jamaica, Canary Islands, El Salvador, and Puerto Rico.

John was predeceased by his brother Vito Bonvezzo of Italy, and Brother Vincenzo from Bergamo, Italy. John is also predeceased by his sister Vicenza D’Andrea from Mistretta, Sicily. John leaves behind his sisters Tanina and Nina Romano from Caltagirone, Sicily, as well as several nieces and nephews in Italy.

John’s family will receive relatives and friends at the First Assembly of God in Brookfield on Wednesday, July 7 from 9am to 10am. Funeral service will be held immediately following at 10 am. Burial will be in Prince of Peace Cemetery in Brookfield, CT.

In lieu of flowers, donations may be made to the Gideon’s International, to purchase bibles. “The grass withereth, the flowers fadeth, but the word of our God shall stand forever.” Isaiah 40:8 KJV.

Johns favorite Scripture- Colossians 3:1-4 KJV- “If he then be risen with Christ, seek those things which are above, where Christ sitteth on the right hand of God. Set your affection on things above, not on things on the earth. For ye are dead and your life is hid with Christ in God. When Christ, who is our life, shall appear, then shall ye also appear with him in glory.”

Share Your Memory of
John
Upload Your Memory View All Memories
Be the first to upload a memory!
Share A Memory
Plant a Tree