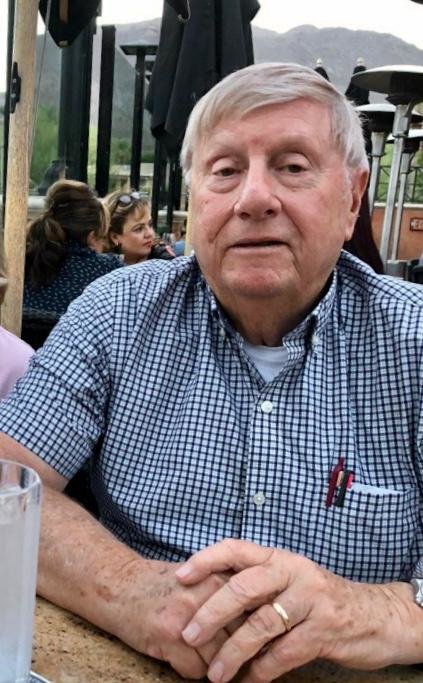 John graduated from Danbury High School, class of 1953, and from Western Connecticut State College in Danbury, class of 1961, and later obtained a Masters degree and a 6th year teaching certificate from the University of Bridgeport.  He taught mathematics and social studies for 34 years, retiring from Stadley Rough Elementary School in Danbury in 1998. In the summer of 1960, as a way to keep busy when school was not in session, he opened a seasonal fast food restaurant with his brother Robert on Route 202 in Bantam, CT, which is operated today by his brother’s family.

John's life centered around his family and many friends.  He was the patriarch of the Hammer family and for many years spoke at the annual Christmas gathering at The Hearth restaurant.  He kept in close touch with family far and wide.  He loved to travel, and a trip always meant working in a visit to any family member within reach of his next destination.

John belonged to a group of civil rights activists who participated in the 1963 March on Washington.  He was an active member and one time President of the Exchange Club of Danbury for many years, and was a member of the Elks Club of Ormond Beach, FL until the time of his death.  He was a devoted and lifelong New York Mets fan and had been so looking forward to this year's delayed MLB opening day.  He also loved cards, particularly the game of “Set Back” and was forever on the prowl seeking partners with whom to play in Danbury and in New Smyrna Beach.  John was an enthusiastic socializer and for many years organized luncheons and reunions of friends from high school and college.

At this time, there will not be a service due to the Covid-19 pandemic.

Donations in John's memory may be made to Western Connecticut State University Alumni Association.  John was fervent in his praise of the college that gave him the education that enabled him to pursue a wonderful career in a field he loved.

Share Your Memory of
John
Upload Your Memory View All Memories
Be the first to upload a memory!
Share A Memory
Plant a Tree