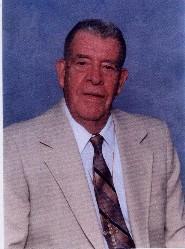 Obituary of Pastor Hans A. Voss

Pastor Hans A. Voss September 27, 1919 - September 20, 2003 Reverend Hans Arthur Voss, age 83, of 241 Evasham Court, Wake Forest, N.C., husband of Alice Marie (Kuhlman) Voss, passed away peacefully to the Church Triumphant on Saturday morning, September 20, 2003, at his daughter's home in Raleigh, North Carolina. He was born in Bach, Michigan on September 27, 1919, son of the late Rev. Emil H. Voss and Esther (Bartles) Voss. He was made a member of the Body of Christ through Baptism on October 5, 1919 and joined the church militant through his confirmation on April 9, 1933. Rev. Voss received his elementary education at Trinity Lutheran School in Monitor, Michigan and Holy Cross Lutheran School in Saginaw, Michigan. He attended Michigan Lutheran Seminar (High School) in Saginaw from 1933 to 1937. He spent two years at Concordia College in Fort Wayne, Indiana, a pre-theological training school of the Lutheran Church - Missouri Synod. In 1939 he began his Seminary training at Concordia Seminary in St. Louis, Missouri. In the spring of 1943, after having received his BA degree, he entered the Vicerages and served until June of 1944 in this capacity at Redeemer Lutheran Church, St. Paul, Minnesota. He graduated from Concordia Seminary on January 17, 1945 and accepted a call to serve as Missionary-at-large for the Atlantic District of the LC-MS. On Sunday, April 8, 1945 he was ordained into the Holy Ministry by his father, The Reverend E.H.Voss, at Holy Cross Lutheran Church, Saginaw, Michigan. He began his ministry on the East coast by doing mission survey work in New Jersey, on Staten Island, New York and in the general Boston Massachusetts area. In September of 1945 he was appointed to establish a Mission Church in Westerly Rhode Island which had been a preaching station for 25 years. He served Trinity in Westerly with accepting the call to Trinity Lutheran Church of Morristown, New Jersey, where he began his work in September 1951. During his ministry at Trinity the congregation purchased land and relocated in Morris Plains, New Jersey. In 1934 a new Church and Parish Hall were dedicated and in 1955 additional land and parsonage were purchased. In September of 1960 a Christian Day School was opened in temporary quarters. In October of 1960 he accepted the call to Immanuel Lutheran Church, Danbury, and was installed as Pastor there on December 4, 1960. During his ministry at Immanuel the congregation grew from 700 to 1,100 communicant members and the staff increased from one pastor and five Christian Day School teachers to a staff of almost 20 full time and part time personnel. In January of 1986 the call was received from Our Redeemer Chapel, New Ipswich, New Hampshire and was accepted. His last service at Immanuel was held Easter Sunday, March 30, 1986. Pastor Voss was installed at Our Redeemer Chapel on Sunday, April 27, 1986. In 1987 Noah's Ark Kindergarten became part of Our Redeemer. Over the past years Pastor has served as advisor to district youth organizations in New England and New Jersey. He was a staff member and Dean of many youth leadership training workshops throughout the country. He has served Synod as Circuit Counselor and for 8 years as a member of the Synod's commission on Services to Mentally Retarded, as a member of the Board of Directors of the Lutheran Service Association, as a member of the Executive Committee. He served on the Southbury Lutheran Home Task Force, as New England Chairman for the Concordia Bronxville Second Century Fund, the New England District Director of Synod's Forward in Remembrance Program and as the Chairman of the Program Committee of the New England District Pastoral Conferences. For many years he served the American Red Cross in its department of Services to Military Families and as a member of the Connecticut State Committee. While in New Ipswich, Pastor Served on the LSA Board of Directors and for several years served as Chairman. He served on the Lutheran Child and Services Committee, as well as the Bethpage Lutheran Service Board of Directors. Pastor and his wife retired to Wake Forest, North Carolina where he was Pastor Emeritus at the LCMS Mission Church of Hope Lutheran, and was vacancy pastor for many congregations, especially Peace Lutheran Church in Glassboro, North Carolina. Pastor Voss is survived by his "Dear Alice," wife of 58 years, Alice Marie Voss, daughters Peggy Ruopp and David of Raleigh, NC.; Karen Sardone and Gary, of Danbury, Jean Sorokin of Wake Forest, NC.; sons, John Voss of Raleigh, NC, Robert Voss of Frederick, MD, Timothy Voss and Pattie of St. Louis, MO, and Mark Voss and Suzanne of Adamstown, MD; a brother, Rev. Ted Voss of Akron, Ohio, 20 grandchildren; 5 great grandchildren; as well as several nieces, nephews, extended family members and special friends. He now joins his third son, Martin, and his grandson, Jonathan Ruopp in the Church Triumphant. Funeral Information Funeral Services will be held on September 26th at Immanuel Lutheran Church, West Street, Danbury at 2:00pm with Pastor Daniel Wehmeier officiating. Burial will follow in Immanuel Lutheran Cemetery. Friends may call on Thursday, September 25th at the Cornell Memorial Home, 247 White Street, Danbury between the hours of 5 and 8 pm and Friday, September 26th between 1 and 2pm at Immanuel Lutheran Church. Donations Information As Pastor Voss's heart was always directed toward mission outreach, he would have appreciated memorial contributions in his memory to LCMS - For the Sake of the Church, or to Immanuel Lutheran Church and School, 26 West Street, Danbury, CT. 06810.

Share Your Memory of
Pastor
Upload Your Memory View All Memories
Be the first to upload a memory!
Share A Memory
Plant a Tree